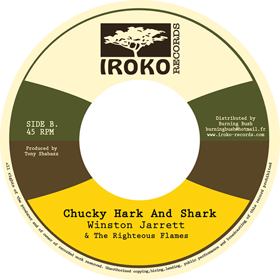 As noted above (see BB 34), Winston Jarrett and the Righteous Flames began working with Ontario-based producer Tony Shabazz in the mid-1970s. The trio first provided harmony on a various artists album Shabazz produced in 1975, called International Rockers, and soon began recording songs of their own for the producer, during relaxed sessions held at Channel One with Sly Dunbar, Robbie Shakespeare, and the Revolutionaries. ‘Chucky Hark And Shark’ is another censorious number, which was issued on a single in Canada on Shabazz’s Karazor label in 1978, and which featured on the album Man Of The Ghetto; the song, which was written by Shabazz, lashes out against a bully—in this case, a former ally of Shabazz’s that had emerged as an adversary—and its dub makes maximal use of the song’s meaty bass line, vibrant conga drumming, and eerie horn riffs. David Katz ©