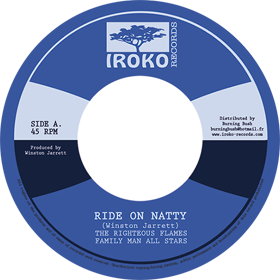 Born in the St Ann’s hillside community of Lime Tree Gardens, Winston Jarrett moved to Trench Town as an infant, since his mother sought domestic work in the capital. After impacting on local talent contests, he formed the Flames with Eggar ‘Baby G’ Gordon to back Alton Ellis during the rock steady era, but when Ellis toured Britain with the Soul Brothers, Jarrett became leader of the re-named Righteous Flames; Errol Green, who had previously sung with Hopeton Lewis and the Royals, joined the line-up in the mid-1970s, shortly before they began working with Tony Shabazz, a singer and aspiring producer that had worked for Prince Buster in the late 1960s, prior to his migration to Canada. The Shabazz/Flames connection bore a lot of noteworthy fruit, even though releases were somewhat sporadic; the scorching single ‘Run Away’ surfaced on a Sha Flames 7” in 1980, a foreboding number about the deviousness of those who pretend to be allies, when their real intention is to destroy us.
David Katz ©