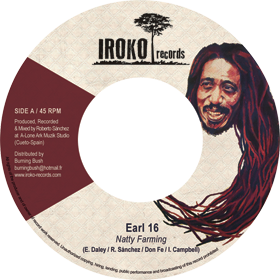 Other releases by EARL 16

Roots reggae stalwart Earl Sixteen started out in the mid-1970s in a soul-influenced harmony quartet called the Flaming Phonics, who folded after a debut single, ‘Hey Baby,’ surfaced on Total Sounds. He recorded ‘Leggo Offa That’ for Alphonso Bailey’s Globe International label, and ‘Love And Happiness’ surfaced on Scorpio, both crediting his given name, Earl Daley. Once he began recording for Derrick Harriott in 1976, recording ‘Malcolm X’ and ‘Charmaine,’ he took the moniker Earl Sixteen, which has stuck with him ever since. Sixteen was fired from the Boris Gardiner Happening for not adhering to the dress code, but the link with Boris brought him to Lee ‘Scratch’ Perry’s Black Ark, were he recorded ‘Cheating’ and ‘Freedom’; further work followed for Roy Cousins, Earl Morgan, Augustus Pablo and Mikey Dread, before he hit big at Studio One with ‘Love Is A Feeling’ in 1982. He moved to London a few years later, where he has been based ever since, and ultimately reached a wider audience by collaborating with Leftfield and Dreadzone. ‘Natty Farming,’ which was produced by Roberto Sanchez at his A-Lone Ark Muzik studio in 2013 (see BB 31), voices a preference for the natural, organic propagation of herb, rather than the faddishness of hydroponics; as ever, the B-side reveals strong musicianship, this time with shades of the Roots Radics in the mix.
David Katz ©