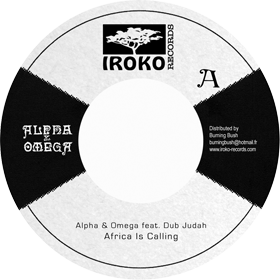 One of the first acts to emerge on the ‘UK Steppers’ scene during the late 1980s, dub duo Alpha & Omega are bassist Christine Woodbridge and keyboardist John Sprosen. Their ying/yang approach to reggae production was mirrored not only in their male/female counterbalance, but also in their twin locations, based between a council flat in Bermondsey, southeast London, and a less hectic site in the seaside town of Plymouth, Devon. Alpha & Omega’s 1992 release Almighty Jah saw them collaborating with the talented bassist and vocalist, Dub Judah, who founded his own Dub Jockey label, and who often backed the Twinkle Brothers in the same era. ‘Africa Is Calling’ encapsulates what the project is all about, placing Judah’s impassioned vocals over the duo’s minimal backing, its version, ‘Banks Of The Nile,’ allowing the listener to better appreciate the complexity of the backing rhythm, with its subtle melodic accompaniments.
David Katz ©