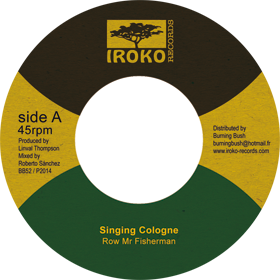 Other releases by SINGING COLOGNE

One of the many impressive, though lesser-known talents that surface every so often in Jamaica, Singing Cologne (aka Oral Roberts) first made an impact around the dawning of the new millennium, when work for Xterminator led to overseas tours undertaken in support of Sizzla. He has since gone on to voice tunes for Max Romeo, Ras Kush of Black Redemption sound system, and several other overseas roots reggae outfits. Here Cologne relates a new take of the ‘Row Mr Fisherman’ theme atop a fearsome mix of Barrington Levy’s ‘Warm And Sunny Day’ rhythm, produced by Linval Thompson and mixed by Roberto Sanchez at his A-Lone Ark studio, with a nicely understated companion dub on the flip.
David Katz ©