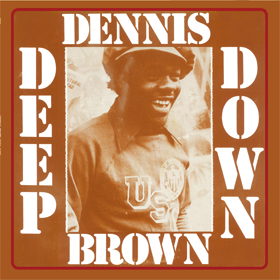 Update Required To play the media you will need to either update your browser to a recent version or update your Flash plugin.
Produced by Winston Niney Holness

Other releases by DENNIS BROWN

The intense creative partnership that Niney the Observer forged with Dennis Brown yielded some of the most noteworthy roots reggae of all time. Brown’s exceptionally clear vocal tones and visionary song-writing ability made him a longstanding favourite in his native Jamaica (as well as amongst the Jamaican immigrant community in London, where he would later spend extended periods), and his ability to refashion cover tunes in his own image was part of the appeal. And although Niney was very much a behind-the-scenes person, his unorthodox approach to record production rendered his output very distinctive, especially once the Soul Syndicate band was at his disposal, with King Tubby and associates on hand to provide the final mix-down. The best of these possible worlds yielded Deep Down With Dennis Brown, an album as exceptional as it is rare.
David Katz ©