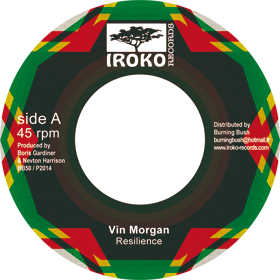 Other releases by VIN MORGAN

The Soul Defenders may not be as well-known as backing bands such as the Supersonics or the Skatalites, but their contribution is no less important. Hailing from Linstead, a market town located in a largely rural section of St Catherine, the group began backing Freddy McKay, Joseph Hill, and other local vocalists in the late 1960s, with Vin Morgan being the resident singer. The band’s guitarist, Jah Privy, reached Studio One as a percussionist in 1969, at Jackie Mittoo’s request, but producer Clement ‘Sir Coxsone’ Dodd did not become aware of the group until 1971, when a mutual friend named Alan informed him of their potential. Their sparse backing had a real ‘countryside’ feel to it, as heard on resultant hits such as Freddy McKay’s ‘Picture On The Wall,’ Joseph Hill’s ‘Behold The Land,’ the Abyssinians’ ‘Declaration Of Rights,’ Dennis Brown’s ‘No Man Is An Island,’ and Alton Ellis’ ‘Hurting Me.’ The band left Studio One a few years later, and cut the odd side for Micron Music and other smaller production outfits, but became more active on the hotel circuit. Morgan’s ‘Face Your Trouble,’ a lesser-known single from Studio One, showed precisely how expressive he could be as a lead singer; later collaborations with Jennifer Lara, Tyrone Taylor and a gospel side with JD Smoothe were also issued by Studio One. ‘Resilience’ is an unexpected new effort from the Soul Defender veteran, recorded recently at Anchor with a stellar cast, including Boris Gardiner on bass, Horsemouth on drums, Dalton Brownie on guitar, Althea Hewitt on backing vocals, and both Morgan and Donovan Palmer on keyboards. The song was produced by Boris Gardiner and co-writer Nevton Harrison, and Boris’ musical expertise really brings to tune to a higher level. This previously unreleased track sees Morgan give good counsel on the courage, conviction, strength and awareness we all need to succeed in life—a great piece of reggae wisdom deliverd in the roots tradition, with a version side highlighting the contributions of sax man Jeffrey Brown, whose lilting melodies emphasise the song’s uplifting nature.