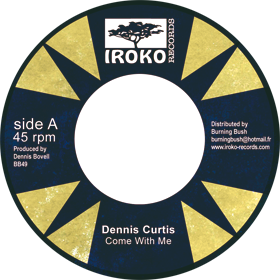 As noted above (see BB 10), the multifaceted musical phenomenon that is Dennis Bovell has taken many forms over the years. In addition to being a founding member of Matumbi, the Barbados-born multi-instrumentalist also ran the Sufferers sound system in west London and was a major component of the lover’s rock scene of the mid-1970s, having crafted the most classic hits of the genre for Dennis Harris, Lloydie Coxsone and others. ‘Come With Me’ is an early solo effort, issued under the alias of Dennis Curtis, which first surfaced in 1976 on the Ilford-based former Trojan session guitarist Buster Pearson’s K&B label (Pearson’s main vehicle for music, prior to the formation of teen family band, Five Star); Matumbi also had a single on the label under the alias African Stone. In full-on roots reggae mode, ‘Come With Me’ explores societal shortcomings and the post-slavery psychological shackling that blighted the lives of so many black people in Britain, its version placing emphasis on drum and bass, with intricate synth stabs adding another dimension; both sides preface the forays into roots and dub Bovell would shortly launch via his Rama label.
David Katz ©