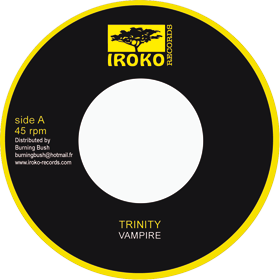 Other releases by TRINITY

When west Kingston deejay Wade Brammer first became active on the sound system circuit in the early 1970s, toasting on sounds like Soul Hombre and Smith the Weapon, he was using the nickname Prince Glen, but when his debut recording, ‘Believe In It,’ was produced by Enos McLeod at Dynamics in 1974, it was issued under the name Prince Charming. Then, after Dillinger took him to Channel One, producer Joseph Hoo-Kim renamed him Trinity, having searched the Bible for a better moniker. Trinity swiftly impacted at Channel One on versions of Earth and Stone’s ‘Jailhouse’ and the Mighty Diamonds’ ‘Have Mercy’ (which he voiced as ‘All Gone’). After cutting a debut album for Yabby You, Shantytown Determination (issued by Prince Tony Robinson, who tried without success to sign the toaster to Virgin), the biggest commotion stemmed from ‘Three Piece Suit,’ which Trinity voiced for Joe Gibbs, paving the way for Althea & Donna’s alternate reading as ‘Uptown Top Ranking.’ Launching his own Flag Man label in 1977 afforded greater control of his musical works, and although it was never the most prolific of labels, everything that surfaced on it is worth investigating. ‘Vampire,’ a chilling cut of the ‘Drifting Away’ rhythm, which gives warning to an unknown entity for duplicitous and insulting conduct, was issued in small quantity on the label in 1979, together with its tremendous dub version.
David Katz ©