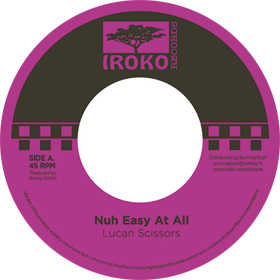 Other releases by LUCAN SCISSORS

The Japanese fascination with reggae and dancehall has been well documented. As with most overseas territories, the initial stimulus came from Bob Marley and the Wailers, who made live appearances there in 1979; then, Sugar Minott introduced Jamaica’s dancehall culture to the far-east islands nation by bringing his sound system to Japan in 1985, selecting the music for Frankie Paul and Sister Carol on the mike, and Minott’s own subsequent live stage performances resulted in scenes of mass hysteria. During the mid-1980s, Shizuo Ishii founded Overheat Records to issue experimental Japanese dub and material by Jamaican veterans; his brother, Sonny Ochiai, drifted over to the Bronx to found Tachyon, becoming known as ‘Sabwackie,’ because he was installed in the basement of Lloyd ‘Bullwackie’ Barnes’ flagship premises on White Plains Road. In addition to releasing music by Wackies associates such as Horace Andy, Chris Wayne and Mikey Jarrett, Tachyon soon branched out into upfront dancehall recorded in Jamaica, co-produced by well-connected dancehall impresario, Trevor Lyn. Lucan Scissors’ 1990 single ‘Nuh Easy At All’ is one of the most impressive of the early crop, being a boastful piece of self-promotion riding a durable rhythm. Just how the man born Dave Smith became known as Lucan Scissors is something of a mystery; following his Rastafari reorientation, the singer later become known as Lucan I.
David Katz ©