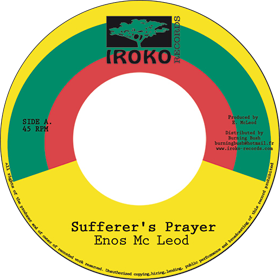 Other releases by ENOS MC LEOD

As noted above (see BB 09), Enos McLeod made fleeting recordings in the rock steady era, but launched more headlong into record production in 1974, when he produced singles by Prince Fari, Doctor Alimantado, Gregory Isaacs, Ronnie Davis, and others. Although he continued recording throughout the roots reggae era, he has limited access to funds, as thus channelled his work through the Soul Beat and Micron outfits. ‘Sufferer’s Prayer,’ which surfaced on Joe Morgan’s Afro Black label in 1975, is a stunning re-working of McLeod’s excellent ‘All I Have,’ showing Enos at his most emotive, singing out the frustrations of a poor man that is facing untold pressure; the version side is heavily manipulated, emphasising the rhythm’s rock-hard interior.
David Katz ©