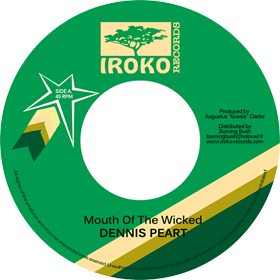 As noted above (see BB 12), sound system entrepreneur Augustus ‘Gussie’ Clarke began producing music in 1972, initially through a bartering system that saw him swapping an old amplifier for a cut of a rhythm. As a sound system man, he had a good ear for deejays, which resulted in swift hits with Big Youth and I Roy, both of whom recorded albums for him. But he also knew how to handle singers, coaxing impressive material from Horace Andy, Gregory Isaacs, the Heptones and Delroy Wilson during the mid-1970s, and later, Leroy Smart and the Mighty Diamonds. He was also working closely with Augustus Pablo, getting the melodica master to do some unusual things, including playing the xylophone on select tracks. ‘Mouth Of The Wicked’ is a mid-1970s one-off from the otherwise unknown Dennis Peart, the Pablo element being more audible on the Simplicity People’s version side, ‘Logan Street Rock,’ which references a street in Brooklyn, close to where Gussie had family, located a few miles away from the base of Keith’s Records, Gussie’s New York distributor. Regularly featured in the day on the south London sound system, Sir Coxsone Outernational, the rhythm also appeared on their King Of The Dub Rock LP.
David Katz ©