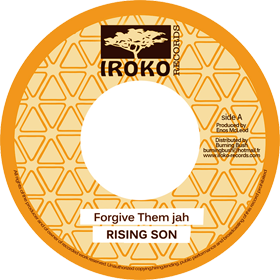 Other releases by RISING SON

Lloyd Johnson, aka, Rising Son, is another of reggae music’s many enigmas. A fisherman from Greenwich Farm that had some talent for singing, Rising Son was also referred to as ‘Mad Mad’, presumably because he suffered from bouts of mental instability. In any case, his debut single surfaced in 1976 on local producer Allan ‘Jah Wally’ Campbell’s New Star label, namely the devotional ‘Jah Jah Robe,’ which was arranged by Enos McLeod, the talented and individual singer-turned-producer who always had more ideas than ready finance, and who then had no label of his own (see BB 09). After the follow-up for New Flower, the dejected ‘Everyone Should Have A Home,’ Rising Son recorded ‘Forgive Them Jah’ for Enos McLeod, which was first released in 1977 on Tommy Cowan’s Top Ranking imprint (and later re-issued on High Times’ High Music subsidiary). Accompanied by Chinna Smith’s restrained wah-wah guitar, Rising Son chants a hymn of forgiveness directed at the enslaving races and their descendents who continue to perpetuate social divisions and other such injustices; the corresponding dub is a sparse, minimal echo that heightens the song’s underlying tension.
David Katz ©