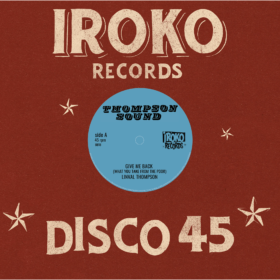 Other releases by LINVAL THOMPSON

In the early 1970s, Linval Thompson followed schoolmates Jacob Miller and Johnny Clarke to Studio One in the hopes of getting recorded; Clarke also tried to bring him to Rupie Edwards’ attention, without much success. Then Linval migrated to New York to join his parents, where he and Horace Andy hung around the Buccaneers (featuring Bunny Rugs and Eric Frater) and the Bluegrass Experience (with Glen Adams). Thompson cut his debut, ‘No Other Woman,’ in 1974, and then ‘Another Man’ and ‘Weeping And Wailing’ (aka ‘Pa Pa Priest’), which both betrayed a strong Dennis Brown influence. Soon Thompson was back in Jamaica, where he adapted Dennis Brown’s ‘Westbound Train’ as ‘Westbound Train’ for Keith ‘Stamma’ Hobson, before cutting more substantial work for Phil Pratt, Lee Perry and Bunny Lee, the latter scoring a major hit with Thompson’s ‘Don’t You Cut Off Your Dreadlocks’ in 1975. Shortly thereafter, Thompson gradually took charge of his own creations, voicing rhythms for producers such as Lee, Augustus Pablo, and Winston Riley, as well as Gregory Isaacs, in order to receive cuts of their rhythms that he could reuse himself. He thus became one of the leading producers of the late 1970s and early 1980s, while simultaneously maintaining an active vocal career. This single features two tracks that date from the mid-1980s: ‘Give Me Back (What You Take From The Poor),’ first issued on a C&E 12-inch circa 1987, has Thompson tackling the unequal distribution of wealth that has marred so many parts of the world, while ‘Lump Sum’ is a minimal digit-dub re-cut of a tune first issued on the Selena label in 1981 (later re-worked by Russ Disciples for a Taittu 10-inch). By virtue of its transitory format, this single sees Linval stepping into somewhat unknown territories…so if you don’t know, get to know.
David Katz ©