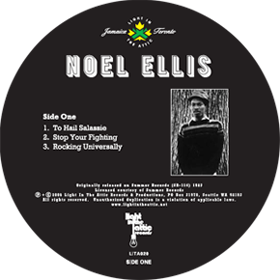 Other releases by NOEL ELLIS

Alton Ellis’ son Noel moved to Toronto in the early 1970s, having been summoned to the city by his father, who was gigging there with Jackie Mittoo, as well as guitarist Wayne McGhie’s Sounds of Joy. And although Alton shifted to London shortly thereafter, Noel remained in the care of his aunt and uncle in Toronto, which became his longstanding home. After forming a dance crew called The Disciples, Ellis began taking the mike at sound system events, impacting on local sets such as Black Zodiac and Upsetter. Aspiring guitarist Anthony Hibbert later introduced Ellis to Summer Records’ founder, Jerry Brown, in 1978 (because Hibbert’s uncle, Winston Francis of the Mellotones, had been recording for him), and Brown was so taken by the pair’s potential that he decided to take a gamble on them. Though debut single ‘Reach My Destiny’ failed to impact, the following year, once Jackie Mittoo and Willie Williams crafted a new version of ‘Armagideon Time’ called ‘Rocking Universally,’ the team drew for Ellis to embellish the tune with his unique brand of toasting, turning the number into a definite dance-floor filler on both sides of the Atlantic. Ellis’ subsequent album, which largely focussed on themes of ‘reality,’ took four years to put together, and benefited from further input from Mittoo and Williams, and even had Johnny Osbourne on percussion. The result is a collection of weighty roots reggae odes, tackling a range of topics.
David Katz ©