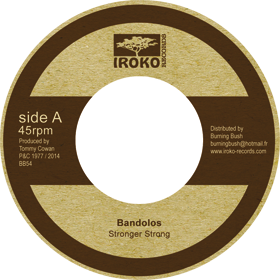 Tommy Cowan’s long and varied career dates back to the mid-1960s, when he joined harmony quartet the Merricoles, which swiftly morphed into the Jamaicans, scoring mammoth hits in rock steady such as the 1967 Festival winner, ‘Ba Ba Boom.’ The group split during the mid-1970s, following a series of recordings for Dynamics, where Cowan remained as sales and marketing manager, co-producing hits such as Eric Donaldson’s ‘Cherry Oh Baby,’ which paved the way for his own subsequent productions, issued on intriguing labels such as Arab, Starapple, Top Cat and Top Ranking. The obscure 1977 single ‘Stronger Strong,’ credited to the Bandolos and issued on Cowan’s Talent label, is the stuff of many a roots reggae collector’s dreams, being a fearsome slice of deep roots music, with harmony vocals in the mode of the Abyssinians, and a terrific dub B-side.
David Katz ©