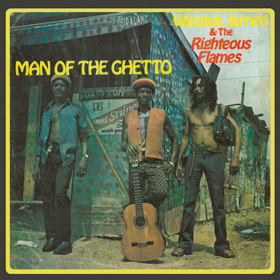 WINSTON JARRETT & THE RIGHTEOUS FLAMES
Man Of The Ghetto

As noted above (see BB 34, BB 35 & BB 37), Winston Jarrett formed the Flames to back Alton Ellis in the rock steady years, fronting the renamed Righteous Flames after Ellis went to England on tour. After recording inconsequential work for Prince Buster, popular tunes for Lee Perry and actual hits for Studio One, Jarrett cut work for various producers, which was always captivating, despite sometimes achieving limited sales. In 1974 he began issuing self-produced work, but was frustrated by lack of ready finance. The 1978 album Man Of The Ghetto comes from the partnership he forged with Toronto-based producer Tony Shabazz, a former associate of Prince Buster that branched more concertedly into record production during the mid-1970s. Cut at Channel One with Sly Dunbar and the Revolutionaries, the album has some of Jarrett’s greatest works of the roots reggae era, with ‘Chucky Hark And Shark’ and ‘Jungle Collie’ benefitting from Shabazz’s lyrical input, and ‘Sleepers,’ ‘My Sheep’ and the title track being sublime examples of Jarrett’s song-writing and vocal abilities; a couple of appealing Wailers cover tunes, and updates of earlier hits complete the picture.
David Katz ©